Your Browser Is Incompatible

You are seeing this message because we have detected you are using Internet Explorer 10 (or older) to browse our site. Unfortunately, this means that your browser is too old to display our site properly and that certain areas of the site may display incorrectly or not at all. Please upgrade to the latest version of Google Chrome, Mozilla Firefox, Internet Explorer, Microsoft Edge, or Apple Safari in order to view this site.

Window AC Units: Here’s Why You Should Get Rid of Them 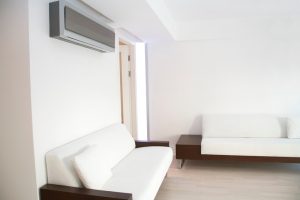 The invention of the compact window air conditioning unit in the 1950s was a significant advance in home comfort. Until then, only expensive central systems could provide homes with mechanical air conditioning, and most houses didn’t have a place for the ducts necessary to transport the conditioned air. With window ACs, almost anyone could have cooled air sent into their rooms.

Even the most powerful window AC isn’t capable of cooling a space larger than a medium-sized room. To get anything like the distribution of cooling you want around the house, you’ll need to invest in multiple units—at least one for every bedroom, and possibly two to handle a space as large as a living room.

They have poor energy efficiency

The efficiency ratings of air conditioners have continued to climb—but not for window units. Where central systems can have SEER ratings in the 20s, most window units are stuck down at 13 or 14 SEER. So not only do you have to run them for longer to get the cooling you want, but you pay more to run them when they’re running.

Let’s be honest: nobody ever thinks of window air conditioners as part of the “décor” of a house. They block up windows and protrude into spaces, and they look pretty unpleasant on the outside of the house as well. Ask any realtor and they’ll tell you it’s far more difficult to sell a house if it has window ACs rather than a central HVAC system. If you ever plan to sell your home, you’ll find that a central AC pays for itself with an increase in your home’s value.

They make too much noise

A window air conditioner is a type of packaged unit, which means all the components are housed in a single cabinet rather than split over separate indoor and outdoor units, as with central air conditioning and ductless mini splits. This means a window unit sends a lot more noise into your home with both fans and the compressor making a racket. Packaged units are principally used for businesses, where the unit is outside the building, not in it the way a window AC is!

They create heat loss in winter

Unless you remove the window air conditioners and put them in storage each winter (an arduous task, especially if you have four or five of them), they’ll allow heat to easily escape through the windows. This will increase your winter heating bills and create cold spots.

If you’re ready to switch to a central AC or ductless mini split heat pump in Channahon, IL and dispose of those ugly, noisy, and un-cool (literally) window air conditioners, talk to one of our specialists.